Is Trudeau ready for a Middle East war? 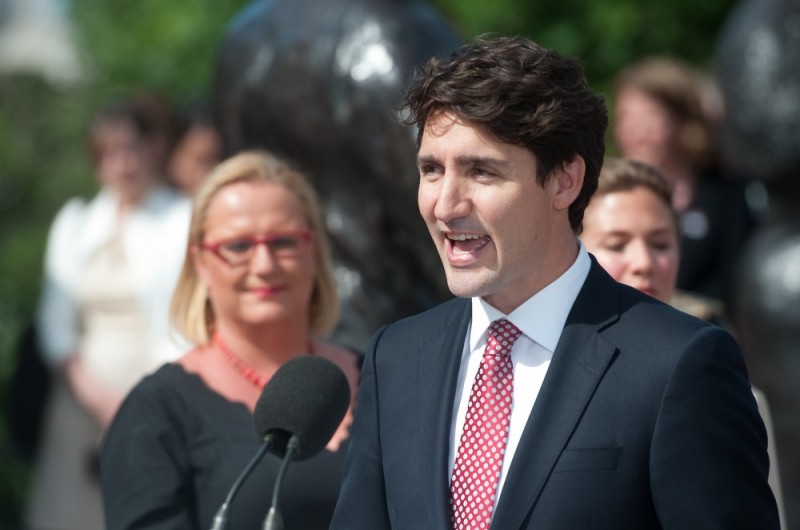 The world is now at the mercy of a coalition of three of the most dangerous autocrats on the planet: Donald Trump, Benjamin Netanyahu and Saudi Arabia’s new absolute ruler Mohammad bin Salman, a name that will become increasingly familiar as the months go by. These three “leaders” are now collaborating in an incredibly reckless plan to permanently reshape the Middle East.

The final outcome will unfold no matter what Canada does. But unless the government of Justin Trudeau gets a grip on reality, Canada will be drawn into this potential catastrophe by virtue of foreign policy positions it has already taken. Geopolitics is getting incredibly complex and there is little evidence that the Liberal government has a clue how to navigate through the dangers. The problem is that despite all the hype about “being back”, Canada’s foreign policy under Trudeau and minister of foreign affairs Chrystia Freeland is still characterized by cynicism and ill-considered trade-offs on files within the broad spectrum of foreign affairs — including investor rights agreements like NAFTA and the Trans Pacific Partnership.

Obviously, a certain amount of realpolitik is inevitable and even necessary to protect Canada’s interests. But even so it begs the question of how Canada’s interests are defined. How much of the store is Trudeau willing to give away to buy favour with the U.S. on NAFTA, especially when it seems concessions like putting our troops on Russia’s border has gotten us nothing in return? With Trump and his redesigned U.S. empire, there is no quid pro quo.

The embarrassing “me too” gang-up on Russia is bad enough. The Canadian version of the U.S. Magnit​s​ky Act is a pathetic effort to please the U.S. (EU allies in NATO are increasingly uneasy about Russophobia given their own particular national interests). And Putin can hurt Canada and Canadian businesses more than we can hurt Putin and his oligarchs — and he has promised to do so.

And the Middle East is a whole other question. Canada’s past sins, such as torture in Afghanistan, and the destruction of Libya, can be dismissed by the government as old news. Canada has thankfully avoided getting re-involved in the chaos that is Middle East politics. But with the coming to (absolute) power of the new and reckless Saudi ruler Mohammad bin Salman, Middle East policy is suddenly fraught with danger and risk for any country allied with the U.S. or with any claim to interests in the region.

The new Saudi prince (who has arrested everyone who might challenge his authority) is encouraging Israel to invade Lebanon, urging the Israelis to do what they want to do, anyway: deal a crippling blow to Israel’s most effective foe, Hezbollah. Hezbollah basically governs Lebanon and has its own well-armed force. Funded by and allied to Iran, it fought the Israeli army to a standstill in 2006. It is this fact that prompted the Saudis to force the resignation of the Lebanese Prime Minister Saad Hariri; he refused or was unable to curb Hezbollah’s political power. The Saudi government upped the ante saying the Lebanese government would “be dealt with as a government declaring war on Saudi Arabia.” It ordered all Saudi citizens to leave Lebanon.

For the Saudis, the ultimate target is Shiite Iran and its significant influence in the Middle East and presence, directly or indirectly, in Lebanon, Syria, Iraq and Yemen. When bin Salman declared that a rocket attack on Riyadh by Yemeni rebels could be seen as an act of war by Iran, the U.S. backed him up, implicitly giving the Saudi dictator a green light for more aggressive action.

Given the political situations in the U.S., Israel and Saudi Arabia, all sorts of case scenarios are now being speculated, with the potential for a rapid escalation of military confrontations, to the point of risking a confrontation between the U.S. and Russia. The first would be an Israeli assault on Hezbollah and Lebanon’s infrastructure. That could be followed by a Saudi-led invasion of Qatar and the removal of its government. While less likely, another confrontation could see the U.S. launch a campaign to seize Syrian territory reclaimed by the Assad regime, on behalf of Israel and risking a direct confrontation with Russia.

All of this could be a prelude to an attack on Iran itself and possibly the use by Israel of nuclear weapons. The rich potential for unintended consequences includes World War III.

If all of this sounds fantastical, consider who currently runs Israel, the U.S. and Saudi Arabia. Netanyahu is mired in his own corruption scandal and needs a distracting war to survive. Bin Salman has already demonstrated a stunning recklessness and ruthlessness: the brutal bombing of Yemen (and now a blockade of food and medicine), the blockade of Qatar, and the house arrest of another country’s prime minister. As for Trump (and some of his generals), he seems to genuinely believe that the U.S. is invulnerable, a truly suicidal assumption. All three heads of state adhere to the doctrine of exceptionalism: the normal rules of international behaviour don’t apply to them.

If one or more of these scenarios begins to play out just what will Trudeau do? His government’s policy towards Israel is driven by political cowardice, rooted in the fear of the Israel lobby in Canada. Towards Saudi Arabia, it is driven by sales of armoured personnel carriers, and a blind eye towards gross human rights violations. With respect to the U.S. it is characterized by ad hoc efforts to predict the unpredictable.

If any of this war scenario plays out, Trudeau will suddenly be pressed to come up with principled positions in response and not just political opportunism and calculated ambiguity. And he should take note: Canadians’ attitudes towards Israel have turned very critical, with 46 per cent expressing negative views and just 28 per cent positive views of that country. As for our proposed $15 billion arms sale to Saudi Arabia, 64 per cent disapprove.

While these progressive attitudes lie relatively dormant at the moment another slaughter of innocents will bring them to life. Is the prime minister prepared?