Ecosocialism and a Just Transition 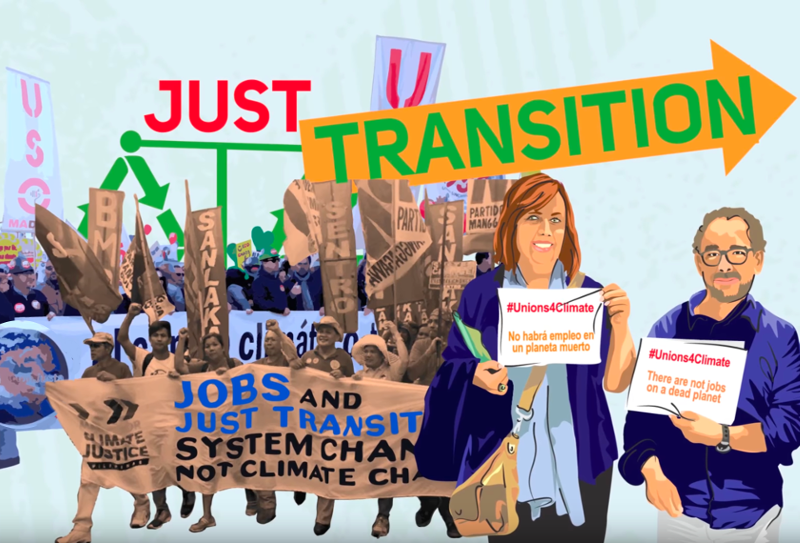 The idea of a “just transition” is appearing everywhere these days, most notably in the preamble of the 2015 Paris Climate Agreement, which refers to the need to take “into account the imperatives of a just transition of the workforce and the creation of decent work and quality jobs in accordance with nationally defined development priorities.”

Just transition first arose as a guiding principle in the labour movement in the 1970s-1990s during the leadership of Tony Mazzocchi within the Oil, Chemical, and Atomic Workers International Union (OCAW), which pioneered in the creation of the labour-environmental movement. Mazzocchi sought to find a way around the “job blackmail” in which workers were constantly told that if they supported environmental measures, they would lose their jobs. In response, he helped popularize the notion of a just transition and proposed a “Superfund for workers.” This was meant to compensate workers for the costs of environmental transition, providing financial support and higher-education opportunities for displaced workers. In Mazzocchi’s words, “There is a Superfund for dirt. There ought to be one for workers.” Yet, all efforts to create a Superfund for workers (in contrast to the Superfund for corporations) was blocked at every point by the dominant capitalist interests.

The labour-environmental cause and the idea of a just transition were to be carried forward in the early 1990s principally by the United Steel Workers (USW). The USW’s environmental policy statement, adopted in 1990 under the title Our Children’s World: Steelworkers and the Environment, declared that “we believe that the greatest threat to our children’s future may lie in the destruction of their environment.” Human beings now had “the power to alter our environment irreversibly.” On global warming the report stated:

The burning of fossil fuels like petroleum and coal generates billions of tons of carbon dioxide every year. This gas and others trap heat in the atmosphere. The resulting global warming could melt the ice caps, flood our coastal cities, and turn huge agricultural areas into deserts. The problem is made worse by the widespread destruction of our forests, which help to absorb excess carbon dioxide. The loss of forests and other habitats threatens many species of plants and animals with extinction. Even our oceans are at risk from toxic runoff, oil spills and waste dumping at sea. Added together, these problems may threaten the ultimate capability of our resources to sustain civilization…. We believe the greatest threat to our children’s future may lie in the destruction of their environment.

In perhaps its most memorable observation on the nature of the just transition, the USW’s 1990 report added: “In the long run, the real choice is not jobs or environment. It’s both or neither.”

Looking back at the original Our Children’s Future report, in its 2006 environmental report, Securing Our Children’s World, the USW observed: “Our original report identified global warming as the single most important environmental issue of our lifetime and warned about the risks of doing nothing.” The chief enemies, the USW underscored, were multinational corporations.

The concept of just transition spread globally in the present century, and was adopted by the International Trade Union Confederation (ITUC), while also receiving backing from the International Labour Organization. For the ITUC, the just transition could be conceived, as a “tool the trade union movement shares with the international community, aimed at smoothing the shift toward a more sustainable society and providing hope for the capacity of a green economy to sustain decent jobs and livelihoods for all.” Most importantly, it was necessary in the ITUC’s view, to face up to the realities of global environmental inequality reflected in the simultaneous existence of carbon-intensive developed countries, increasingly carbon-intensive emerging economies, and low-carbon, highly climate-vulnerable developing countries. No solution was possible without recognizing the differentials in how labour was placed globally in the face of climate change and energy needs.

The concept of just transition, meanwhile, has spread far beyond labour, and is seen today as also encompassing issues of Indigenous rights and environmental justice. For the Indigenous Environmental Network, based primarily in the United States, a just transition must confront “a legacy of exploitation, ecocide, and environmental, energy, climate, and economic injustice.” Hence, it must encompass “the recognition of Indigenous rights and the rights of Mother Earth.” Further, “a just transition calls for the rejection of all market-based mechanisms that allow the quantification and commodification of Mother Earth’s natural resources and processes, rebranded as ‘ecosystem services,’ carbon trading, carbon offsets, conservation and biodiversity offsets, and financialization of Nature.” The Climate Justice Alliance meanwhile emphasises that a just transition must deal with environmental injustices, such as environmental racism, deeply embedded in present-day society.

The main current proposal for a Green New Deal – associated with democratic [Democratic Party] socialist Alexandria Ocasio-Cortez – includes the recognition of the need for a just transition, in the sense of recognizing the needs of labour, Indigenous peoples, and the environmental justice movement. But it is precisely the more radical notions of a just transition that are coming under attack and are in most danger of being negotiated away at the outset in attempts to mainstream the #GreenNewDeal in capitalist society. It was for this reason that the newly reemerged Science for the People has issued its “Peoples’ New Deal Campaign,” dedicated to underscoring the idea that nothing can be accomplished without a struggle that incorporates the demands of labour, people of color, Indigenous populations, women, LGBTQ people, and the populations in the global South. Moreover, this must start with opposition to militarism and imperialism. This also means the rejection of eco-techno fixes such as nuclear power, geoengineering, and other false and destructive “alternatives.”

Yet, it is precisely when the call for a just transition becomes universalized, taking into account the needs of the world populations, future generations, and the diversity of life on earth itself, that it becomes obvious that any such transition is impossible under capitalism. Indeed, it represents the concrete negation of capitalism. Here the message of the ecosocialist movement, embodied in organizations like System Change Not Climate Change in the United States, are indispensable. A just transition, if it is to be more than words, demands another mode of production altogether, one no longer based in the logic of “Accumulate, accumulate! That is Moses and the prophets!”

It is thus necessarily intertwined with the class struggle, while intersecting with struggles over social reproduction, racial capitalism, and militarism and imperialism – all of which question the very foundations of capitalism. If we are to save our children’s world, we will have to be more revolutionary than at any time in human history, directing our efforts at sustainable human development, i.e., complete socialism, encompassing the needs of the entire chain of human generations, as well as the protection of the earth itself. In the end, there can be no other meaning to a just transition.

John Bellamy Foster is a professor of sociology at the University of Oregon and the editor of Monthly Review. Visit johnbellamyfoster.org for a collection of most of Foster’s works currently available online.

This article originally appeared on RebelNews.ie.