Under the current leadership the Congress is viewed by many activists to be floundering and largely irrelevant to many of the important struggles of the labour movement. This is in spite of the fact that the Congress is widely recognized as doing valuable work, especially in the areas of research, and on issues such as racism, sexism, homophobia and equality.

The problems of the CLC are both structural and political. From a structural perspective the CLC has become overshadowed by the larger affiliates. Today it is the large multi sector unions in the private sector, such as CEP, CAW, USWA, and UFCW, and mega public sector unions such as PSAC, CUPE and NUPGE, which have the financial resources and the organizational structures that enable them to set the direction for the labour movement.

However the deep dissatisfaction with the Congress also has a political dimension. Ask most people about Buzz Hargrove and they will have an opinion. Ask about the Congress and most people do not know the name of the CLC President.

This lack of public identification is a consequence, not a cause, of the problems facing the Congress. Most activists do not know where the current CLC President stands with respect to most of the major challenges that currently confront the labour movement and working class people. Increasingly CLC President Georgetti is perceived as being more interested in lobbying politicians than leading workers in their struggles.

At the bargaining table unions are being hammered on the issues of pensions and benefits. Yet the CLC resisted calls to convene a meeting of affiliates to share information and develop a common strategy. The 2002 convention mandate to organize a campaign for a national pharmacare program has gone unheeded. The Congress has played virtually no role in mobilizing affiliates to support the UFCWs monumental struggle to organize WalMart. When it comes to support for and involvement with coalitions many of the CLC staff and several officers are excellent but President Georgetti has displayed no leadership in this important work.

The Left has to take some responsibility for the lack of debate around the role of the CLC. At the CLC the president is responsible for defining the direction of the Congress. There has not been an electoral challenge to CLC Presidency since 1990 when Dave Werlin ran against Shirley Carr. The absence of leadership contests has meant that the CLC presidents, including CLC President Georgetti, have never had to articulate their plans for the Congress or their vision of the role the Congress might play in a movement increasingly dominated by a few large unions.

ALL candidates running for the presidency should be required to share their vision of the labour movement and the CLCs place within it. This should apply to uncontested incumbents as well as candidates in electoral contests.

Hopefully we will see a challenge for the position of CLC President. It is time we had a leader who can articulate a clear vision for the role of the CLC within the labour movement and in society at large.

It would also give the convention delegates the opportunity to ask some questions of the candidates such as:

1) What role they see the CLC playing in major organizing campaigns in the financial, retail and service sectors?

2) How they see the CLC strengthening labour councils?

3) How should the Congress assist affiliates in fighting back against demands for concessions and contracting out and privatization of public services?

4) How should labour fight against the business agenda for deep integration with the United States?

5) What will the Congress do to work with coalitions and how will it encourage affiliates to do likewise?

6) What will the CLC do to stop unions like the Teamsters and the IWA from undermining other unions by signing sweetheart voluntary recognition agreements with employers?

7) How should the Congress work to promote an equity agenda at the bargaining table, in the labour movement and in society as a whole.

I am sure there are many other important questions, which should be answered by anyone running for the position of CLC President. Hopefully the delegates to the convention will have the chance to put them to the leadership candidates.

Labour activists need to get a sense that the CLC is important and relevant and determined to unite a movement that is becoming more fragmented and divided. Hopefully the 2005 CLC convention will be a turning point for the labour movement. 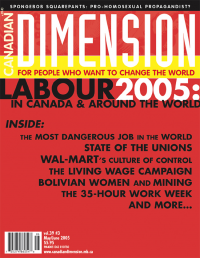 This article appeared in the May/June 2005 issue of Canadian Dimension .